My previous post on building an Art-Net to DMX interface using an ESP8266 seems to be getting a lot of attention. However, from the comments it is clear that a lot of people that build it themselves have difficulties to get it to work, or don’t get it to work at all. This post investigates this in more detail.

We have not been using these interfaces in our performances for quite some time, and started wondering whether there is something wrong my firmware. My implementation goes back to April 2017. Over the course of time there have been some updates to my code. Furthermore, the Arduino IDE has been updated, as well as the ESP8266 core for Arduino.

Recently I received all three interfaces back that I had built for my 1+1=3 collaborators and decided to update the firmware and to test them. One of them did not work at all due to a broken connection between the power supply and the Wemos D1 mini; two of them started just fine. After fixing the broken wire and updating the firmware on all three of them; they started up just fine, showing the green light (indicating a connection to the WiFi network) and on the monitor page of the web interface I cold see that Art-Net packets were being received. However, with my DMX controlled light it did not work at all.

Using an Enttec Open DMX interface and the very nice JV Lightning DmxControl software (which supports both Art-Net and the Enttec Open DMX), I set out to debug the issue. Since DMX is all about timing, I connected my DS203 mini oscilloscope to pin 2 and 3 of the DMX connector.

I found detailed schematic information about the timing of the DMX protocol on this page. Searching for oscilloscope images of DMX signals, I also found this page with information.

Comparing the output voltage with the DMX512 schematics, it became clear that something was wrong in the signal. To make it easier to see the full signal on the oscilloscope, I configured only three DMX output channels, all set to zero. The oscilloscope shows 5 similar blocks; changing the value for DMX channel 1, I see that the 3rd block changes – that is apparently the first channel. Prior to that should be a “start code” with value 0, so the last 4 blocks make sense. But the first block is too short; there is also a very short pulse all the way at the start which does not match the specification.

Output voltage with the initial firmware:

By connecting the Enttec Open DMX to my DMX controlled light, I could confirm that the combination works and that the DMX interface to my light is not broken. Connecting the Enttec Open DMX to the oscilloscope, I see that it has a much longer 1st block which is the “space for break” (labeled 1 according to this), and slightly different 2nd block which is the slot with the “start code”. Following is a whole series of blocks/slots corresponding to the DMX channels. In this case I cannot limit the number of DMX channels, so the series contains a full universe of 512 channels, each of them set to zero. Changing the values of the first few channels in Lighting DmxControl, I can see the corresponding change in the signal on the oscilloscope.

Since a static photo of the oscilloscope screen does not show that there is quite some jitter, especially in the first part of the signal, I uploaded a short video recording of the Enttec Open DXM signal.

As the initial “break” signal was apparently not correctly implemented in my firmware, I changed the code to use the low-level implementation of the break that was contributed here. Using 3 DMX channels again, this results in a good DMX signal.

Output voltage with the firmware, using the low-level break:

I investigated the problem with the original code, which consists of switching to a slower baud rate, sending a single byte as the break signal, and switching back to the original baud rate of 250000. Given that the “break” appears just as long as the other bytes, the switching of the serial port speed apparently fails. On the Arduino forum I found a post that suggested to flush the serial port prior to and after changing the speed; I implemented this and now the break signal looks fine again.

I think that the reason that it broke is due to updates in the Arduino version that I am using, and/or updates to the ESP8266 Arduino core. I guess I must have been lucky with my buggy initial implementation; this may explain why it failed for some people and worked for others.

Output voltage with the firmware, using the slow serial break:

Connecting my Art-Net to DMX512 adapter with updated firmware to the DMX controlled light initially did not work; increasing the size of the DMX universe that is is passed on by my Art-Net to DMX512 adapter solved this. After some trial and error it turned out that – although I had configured the DMX light for three channels (R, G, B) – it would not work if it would receive less than 8 channels. I suppose this is because the light has a 3, 4, and 8-channel DMX mode, and that 8 channels is apparently the minimum for DMX input to be properly handled.

Comparing the timing of the three systems

Looking back at the videos, I see that the timing of the Enttec Open DXM controller is the worst, especially in the space for break and the mark after break (MAB). This is actually a known characteristic of the Open DMX, since timing is controlled by the serial (USB) port of the computer rather than by a dedicated microprocessor; that is also the reason why it is not recommended for serious applications.

My own EXP8266 firmware with the low-level code for the break shows less jitter for the break. Using the “slow serial byte” the jitter is totally gone for the break itself, but there is still some jitter in the duration of the MAB.

Regardless of the jitter, all three are working fine with my DMX controlled light! Having seen the timing of the signals in detail, I am also more confident that they should work with other DMX equipment. One thing I noticed however and don’t have a solution for right now, is that the differential voltage of the Max485 modules that I am using is considerably lower at ~3.5V than that of the Enttec at nearly 8V.

To summarize, I was glad to have the Enttec Open DMX USB adapter for testing, and especially for having the DS203. If you are doing electronics like this, I can really recommend to get an oscilloscope!

Besides testing with the Lightning DmxController software, I was also able to confirm that it all works smoothly again with our EEGsynth, using a patch consisting of the redis, inputcontrol and outputartnet modules.

Update 1 August 2019 – added the connectors to the list of components.

Update 4 July 2019 – You may also want to check out this instructable, which describes a more sophisticated ESP8266-based solution.

Update 6 April 2019 – I wrote a follow up post on the timing and jitter in DMX512 signals and fixed a bug in the firmware.

Update 26 May 2017 – added photo’s of second exemplar and screen shots of web interface for OTA.

Professional stage and theatre lighting fixtures are mainly controlled over DMX512. To allow a convenient interface between the EEGsynth and this type of professional lighting systems, I built an Artnet-to-DMX512 converter. It quite closely follows the design of my Artnet-to-Neopixel LED strip module.

Let me first show the finished product. It has a 5 pin XLR connector, a 2.1 mm power connector, and a multi-color status LED:

END_OF_DOCUMENT_TOKEN_TO_BE_REPLACED

As explained in a previous post, for the EEGsynth we want to use a neopixel array that can be controlled wirelessly using the DMX512 protocol. I purchased a number of Adafruit neopixel rings with 12, 16 and 24 elements respectively. Each RGBW pixel contains a red, green, blue and white LED. For the 24-pixel ring that means that there are in total 4*24=96 LEDs of which the intensity can be set.

The hardware connection is simple: I connected Vcc and GND directly to the Wemos D1 mini board, and connected pin D2 to the data-in of the first pixel. Although the Neopixels are specified for 5V, in my experience the Adafruit rings also work fine at 3.3V, both for power and for the serial control signal. Each LED can take up to 20 mA when fully bright, which means that all LEDs of the 24-pixel RGBW ring can take up to 24*4*20 = 1920 mA, or close to 2 A. However, not all LEDs will be at full intensity at the same time, and driving them with 3.3V rather than 5V further reduces the current. I encountered no issues powering them over the USB port of my MacBook.

For the EEGsynth we want to map a small number of control signals to aesthetically pleasing light effects. E.g. it can control the hue, the frequency with which the array flashes, or the speed with which a bright bar rotates along the ring.

END_OF_DOCUMENT_TOKEN_TO_BE_REPLACED 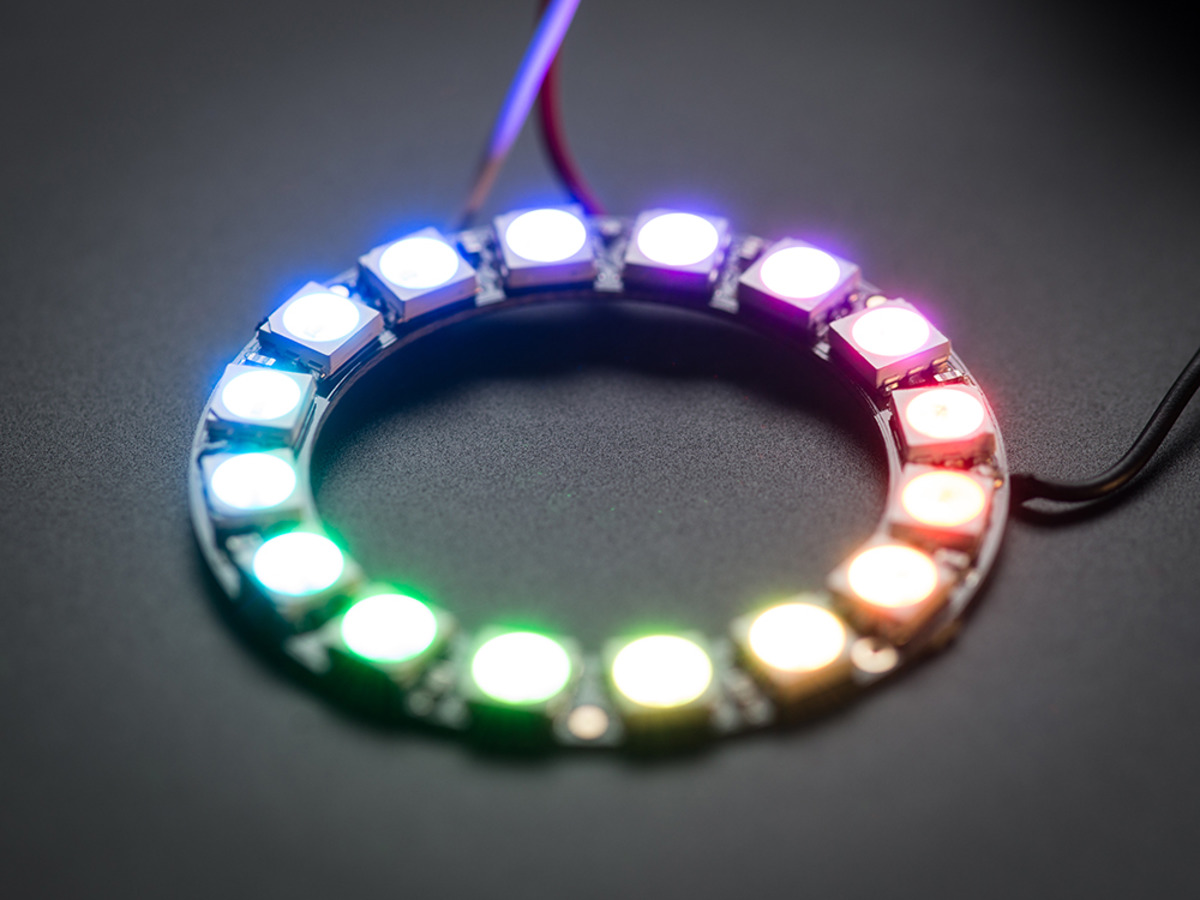